How was Scientia Canadensis created, and to what needs did it respond?

In 1976 Richard Jarrell and Arnold Roos founded the HSTC Bulletin, the Quarterly Newsletter for the History of Science and Technology of Canada*. In 1984, the HSTC Bulletin became Scientia Canadensis: Journal of the History of Canadian, Science, Technology and Medicine / revue canadienne d’histoire des sciences, des techniques et de la médecine. During this period the journal became the main venue for publishing conference papers delivered at the biennial conferences for the Canadian Science and Technology Historical Association (CSTHA).

Scientia Canadensis is published by an association. What role does the CSTHA play in the journal?

The editor-in-chief is a member of the association’s executive committee. This position is appointed by the committee and reports regularly to it. Scientia Canadensis also has an advisory board comprised of association members. Scientia is financed in part by membership fees, but mainly by publishing revenues received from Érudit.

How does Scientia Canadensis manage its bilingual nature, in both its editorial and administrative activities?

Since Scientia Canadensis is dedicated to examining the history of science, technology, and medicine in Canada, it necessarily does so from a bilingual perspective. The journal, however, does not have a quota for French and English: it accepts articles in both languages and the number of articles in either language is determined by the contributions it receives. The editorial team is bilingual in varying degrees. The managing editor communicates with Érudit in French, while assistant editor Mahdi Khalfaoui proofs all French contributions.

How has the journal dealt with the shift from print to 100% digital format?

The change from print to digital publishing has offered both challenges and opportunities. From a production perspective, the digital format allows Scientia Canadensis to publish more articles and reviews per issue. More importantly, we can now include colour images in every article, something we’ve never done before. We can also include more images in each article. Beginning with volume 38, number 2 we introduced a new design and format for Scientia that takes advantage of digital publishing. Switching from print to digital also poses challenges. One is managing the expectations of subscribers and institutions who are used to a print version. Another is designing a journal that appeals to readers (and who may still print out articles) yet is completely digital.

What will the journal look like by the time we celebrate “Canada 200”?

What would be your Top Five French and Top Five English articles?

This selection of articles (see Bibliography infa) illustrates the range of scholarship that Scientia Canadensis has published over the last 30 or so years. We polled Scientia editors and members and this was the feedback we received. Such a list could easily stretch to 20 or more articles, such is the range and quality.

Editor-in-Chief of Scientia Canadensis; Curator of Physical Sciences and Medicine at the Canada Science and Technology Museum, Ottawa

Back
10
Peak Oil Theory in Canada’s Globe and Mail: A Case Study of the Construction of Ignorance
(2014) 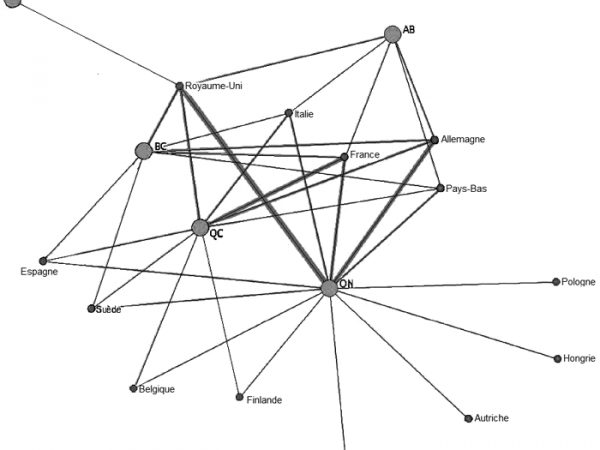 This article examines the evolving relationships between researchers from Quebec and Canada and their counterparts in countries of the European Union over a period of thirty years. A quantitative analysis of scientific publications and their characteristics provides a useful and informative mapping of international scientific relations and their development over time at the national, provincial and institutional levels. This type of analysis is useful not only in evaluating the effects of internationalization policies, but can also be used as a tool to create policies that are consistent with the choices of researchers who, following the logic specific to their field of specialization, build international networks so as to maximize their research success.