Can you tell us about the context in which Recherches féministes emerged?

Starting a new periodical, establishing its credibility and then ensuring its financial survival and above all its scientific legitimacy was not an easy task. All the more so given that at the end of the 1980s feminism was, and still is, often perceived as an exclusively political movement situated on the margins of science. This is completely untrue because although the progress of research helped the “cause”, it is primarily science and a better knowledge of our societies that are advanced through research.

In 1988, the year Recherches féministes (RF) was created, feminist research in North America and in the Anglo-Saxon world in particular was already rich with thousands of publications in multiple disciplines and the concept of the “relations between the sexes” was at the heart of many of the issues raised at the time. The journal therefore emerged in a context that can be described as favorable at a time when feminism had momentum just about everywhere in the western world as the International Year of the Woman (1975) attests.

A committee of the Groupe de recherche multidisciplinaire féministe (GREMF) founded the journal. Without the financial support of the Faculty of Social Sciences of Université Laval, this periodical would never have seen the light of day. The idea for the journal had, however, arisen well before its creation. It was discussed at the first meetings of the professors and master’s and doctoral students who established GREMF in 1982.

The equivalent of the working papers produced in the Anglophone academic milieu were initially published as Les Cahiers de recherche du GREMF. And then with enthusiasm and the same interdisciplinary collaboration, the journal project was developed. Huguette Dagenais became the editor. The first drafting committee also included colleagues from other universities (University of Ottawa, Université du Québec à Rimouski, Université du Québec à Montréal and the Simone de Beauvoir Institute, Concordia University). With so many competent people drawn together in the same room, the meetings of the Committee were quite animated and all were oriented towards a common goal: to produce an interdisciplinary scientific journal rooted in the concerns of the feminist research community and the women’s movement.

“Recherches feministes is here to fill an important gap in Quebec and the francophone world. A few scholarly journals have devoted one or two issues to women (issues which, incidentally, always sell very well), but an issue here and there in journals where, moreover, feminists (and women in general) are barely present, is clearly insufficient and quite random.”*

This is how the journal presented itself on the first page of its first issue. What would one say today?

In 2017, RF remains the only feminist research journal published entirely French in Canada and one of the few refereed feminist journals in the francophone world. It responds to a clear need for francophone feminists in Quebec and Canada who cannot hope to be widely read by publishing in French in bilingual journals. In addition, the fact that nearly 35% of the articles published since 1988 have come from abroad shows that the review is oriented towards the international francophone feminist community. Statistics on viewership of the digital format also testify to the importance of its readership outside Quebec.

By reaching a diverse audience that is interested in feminist research (universities and college, women’s groups, government ministries, unions, etc.), the journal contributes to the production and transformation of knowledge and represents a unique site for exchange and discussion for francophone feminists in Canada and elsewhere.

Faithful to its beginnings, the deconstruction of sexist knowledge accompanied by new constructions of the object of the reproduction of the relationships between women and men, and the willingness to modify those relationships, continues to permeate the spirit of the journal. More recently, queer theory, that seeks the subversion of sexual identities, postcolonial studies as well as intersectional approaches that take into account the entanglement of gender in various types of discrimination such as—but not exclusively—race and social class, have come to enrich the feminist viewpoint. They enable the journal to distance itself from any essentialism that ignores the constructed (and therefore possible to overcome) nature of relations of domination.

What are the primary themes and major topics that have featured in the journal?

Over time, and in a very general way, the RF has been able to dissect the oppression of women, but never from a victimization perspective; the journal has transformed women’s complaints into a reasoned and well-founded form of speech. The concept of empowerment has thus been at the center of much research. Political and social equality, reproductive rights, education, work and violence have been the main topics discussed.

However, the themes can also be presented according to a different logic. The journal has thus emphasized feminist approaches in a world historically dominated by men by publishing issues on religion, the State, globalization, technology, science, management, representations, art, humor and sports. The journal has also published special issues on feminism in worlds traditionally associated with female roles, including issues relating to education, the family and maternity, and health. The result is that the journal is a place of thematic and ideological diversity which serves as a fruitful means to reflect and to develop.

Does it seek to be activist? If so, what means have been adopted to fulfill its political mission, its mission of social change?

RF seeks to contribute to the advancement of feminist research by disseminating the results of unpublished research. It also publishes theoretical, methodological and epistemological papers, research notes, reviews of books and innovative feminist practices, bibliographies and other information relevant to research and the movement. It is open to all those who are interested in change and constitutes an essential source of information for education, research and feminist action.

The volunteer production and militant viewpoint of the journal are an activist stance in favor of the continuation of feminism because freedom and equality remain the most incomplete promises of modernity, even in the highest realms of knowledge.

Does the journal maintain privileged relations with the feminist community and with other journals concerned with the same questions?

From its beginnings, RF has been associated with the Chaire Claire-Bonenfant – Femmes, Savoir et Sociétés, formerly known as the Chaire d’étude sur la condition des femmes. Both the journal and the Chair were created in 1988. Since December 15th, 2016, the journal has been part of the Institut Femmes, Sociétés, Égalité et Équité, which draws together those at Laval University interested in equality between women and men. From 2003, the journal has been a part of the University’s l’Université féministe d’été which brings together more than a hundred worker and student activists from various backgrounds. Each year during that activity, the journal launches recent issues and circulates previous issues.

In this way, the journal continues the necessary and political work of bringing together both the academic community and the environments and people studied and institutional and activist feminisms.

What are the practical implications of feminism for the journal?

RF is run by an editorial committee composed of feminist professors who belong to different disciplines and fields of research and who come from a number academic institutions in Quebec and French Canada. This multidisciplinary and cohesive committee is responsible for editorial policy.

With regards to the authors of published papers, while the vast majority are women, 8% are men.

The journal seeks to have women’s voices heard and to support their talents. For this reason, the cover page of each issue presents, as often as possible, the work of a female artist. In particular, the journal has reproduced the works of Geneviève Cadieux (vol. 20, no 2), Nina Hemmingsson (vol. 25, no 2), the Guerrilla Girls (vol. 27, no 2) and Ellen Gabriel (vol. 30, no. 1).

If you had to choose from all the articles or issues published, which one would you choose?

To have access to the best and to discover the pleasure of reading RF, going through all of the introductory texts, as Érudit easily allows, is without doubt the path to follow. The introductory texts contain the essence of each issue and much more. We see in these texts the extent to which the journal has been and remains open to debate and how multiple feminisms can be expressed without exclusion. 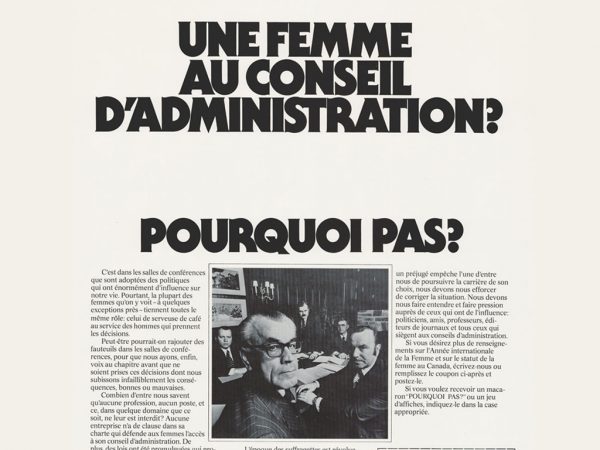 It is not only by being present that men gain power, it also depends on how they organize themselves into clubs and circles or around a table, an icon, an ideal… As a manifestation of networking, the Boys’ Club clearly accounts for the dynamics of confiscation and the manufacture of power by man (the universal man, i.e. white and heterosexual). We must now identify the clubs and imagine how to reconfigure them.